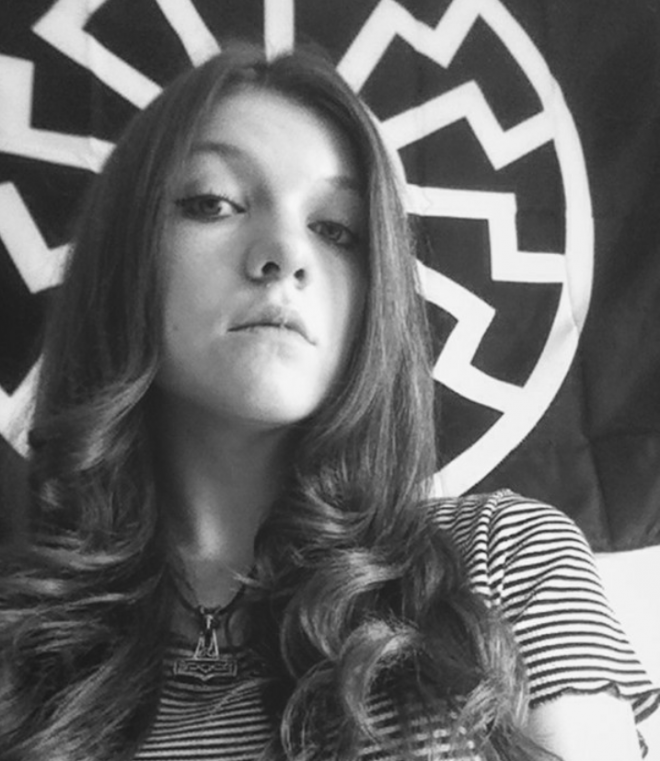 Today AFA Lund can reveal that a French Nazi and language student holds a position as a club official at the Blekingska student houseing in Lund.
In the autumn term of 2017 Clara Gutierrez moved to Lund to study Nordic languages. During her time in Lund she has maintained a low profile and was elected club official at the Blekinge nation.
To Clara’s great delight, after new year, she received a visit from her boyfriend, Quentin Gimmel. They enjoyed their time together and went on sight seeing in Lund – besides visiting the usual sights in Lund, they also decided to visit the socialist book cafe India Däck. Following this visit, it was discovered that Clara and Quentin are organized fascists at home in France. Clara and Quentin are organized in Bastion Social (BS), a group of French identitarians who are the successors of the Groupe Union Défense (GUD).
GUD was a French student organization formed in the 60’s. It was a militant movement that since its inception has committed many violent crimes against HBTQ people, peaple of color, immigrants and others it has perceived as enemies.  After occupying a house at the end of May 2017, which they call “Bastion Social”, GUD dissolves in December 2017, and the members instead formed BS. The last leader of GUD Lyon, Steven Bissuel, joined BS at the start as BS first leader. BS was created when they realized that GUD was far too associated with violence and thus had no legitimacy to work with social issues. BS has tried to change its image, for example, by having a homeless soup kitchen only for “French”. If you want to read more about GUD and BS, we have collected a number of links at the bottom of our article to news articles about thier racist criminal activity.

Update (February 8th, 2018): After being contacted by the person renting out his apartment to Clara, we have chosen to remove Clara’s living address from our article. Clara’s landlord announced that he had not known about Clara’s fascist membership or opinions. She is renting an apartment belonging to the Blekingska nation’s homes, and in contact with the first-hand owner, has concealed her fascist political commitment. In his correspondence with us, the first-hand owner of the apartment has clearly and unequivocally told us he wants no part of Clara’s fascist ideas and distanced him self from Clara’s fascist activities.

If you feel our article affects you or want to avoid our future attention, just email us. Here is a good summary in swedish of how we relate to contact from defectors: Regarding the departure from the fascist movement.
With this article, AFA Lund wants to inform the public about Clara Gutierrez’s Nazi commitment. Do you know Clara personally, or do you see her in your everyday life, at the nation or university? Do you have other information about fascist activity in Lund or other parts of Skåne? Do not hesitate to contact Us!

With this article, we also want to welcome Clara – a belated – welcome to Lund, and hope she has many exciting stories to take with her home to Quentin.